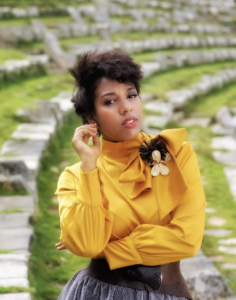 Zule Guerra a singer/songwriter from Havana, Cuba. While studying for her degree in Biochemistry at the University of Havana, her attachment for art and music grew so much that when she graduated she had no doubt that music was her passionand she wanted to be a singer more than anything.

Zule is a lover, a worshiper one may say, of jazz. She is drawn to its flexibility, spontaneity and multiple styles, which is why she began to pursue it in festivals, nightclubs and concerts. She studied its history, roots and evolution. Zule created her band Blues de Habana in 2012 and, with it, she opened herself up to improvisation and experimentation. From that moment on, her voice would become the most important instrument within her creations.

Zule and her band would win the Interpretation Award of the Cuban JoJazz contest, for young talents, in the senior category. It was a turning point in her career: they started booking her at festivals and prestigious jazz clubs where opening up its doors for her.

Her first official concert —in the theater of the National Museum of Fine Arts— would rise up her first album Blues de Habana (Egrem, 2015), which won the Cubadisco Prize in the New Artist category.

From that moment on there was no stopping to her musical career.

With her most recent record production, El Viaje (Egrem, 2020), Zule launches a conceptual speech from her music that aligns with her most sincere image as an artist. Produced by Ernán López-Nussa, it is an album that speaks, in different ways, of her experiences, roots, idiosyncrasy, achievements, defeats and family, an important pillar in her life

Zule Guerra is an incredible talent that can not be overlooked.