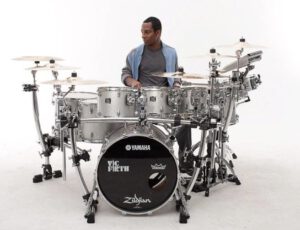 Chad was born in Atlanta on and displayed a keen interest in drums early on, which consisted of banging on pots and pans in his parents kitchen. At age 4, he got his first drum set and began listening to every single music influence around him at the time. Chad decided to get serious and started taking formal lessons. By age 11, he was gigging around town with his twin brother Chay, playing everything from talent shows and parties to night clubs and his grandfather’s church.

In 1989, Chad decided to study music performance at Valdosta State University and perform with their incredible big band, marching band, percussion ensemble and symphonic band. But, in 1991, Chad made a move that would change his life and career. He and is brother enrolled in Berklee College of Music in Boston, Mass. While at Berklee, Chad not only studied with some of the best professors and instructors there (Ed Kaspic, Jon Hazilla, Dennis Montgomery III and Richard Evans), but he also played and recorded in some of the most recognized ensembles. He also had the chance to play with some very notable names in music like Oleta Adams and Yolanda Adams.

In Chad’s final year at Berklee, he started to go on the road with the disco legends Tavares and New England rockers Mark Morris & Catunes. It was during this time that Chad began to mold his voice as a drummer, becoming truly versatile in every sense of the word. Six years of playing with these two acts allowed him to prepare for the biggest move of his career: L.A.

In 2000, Chad made the move to Los Angeles and took his career to the next level. He gave himself three years to land a big gig. Little did he know that between becoming a driving force in the L.A. blues scene and playing with former Temptations lead singer Ali Ollie Woodson (that ultimately lead him to his beautiful wife, Noriko), he would have a gig opportunity with Melvin Lee Davis and land the Chaka Khan gig. After the Chaka tour ended, Melvin recommended Chad to legendary guitarist Lee Ritenour for his fall 2002 tour along with Gerald Albright. From there, the hits just kept on coming, from Monica, Tyrese and Eric Marienthal to Teena Marie, Rick James and Kieko Matsui.

He later on toured with Michael Bolton and landed The Jacksons tour through friend and music director Rex Salas. Currently Chad is touring with Bruce Hornsby, but the tour has been postponed due to COVID.